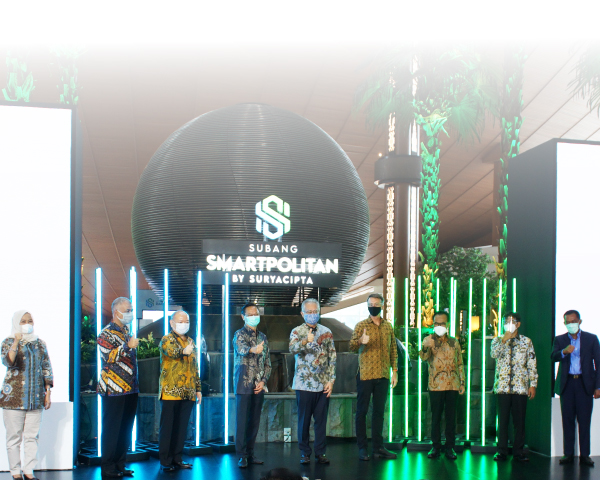 Adapting to the current pandemic condition, the Subang Smartpolitan Groundbreaking Ceremony event was being held both on the ground and virtually. The attendees were able to participate through offline or online (live streaming) methods, utilizing YouTube Live, Microsoft Teams, and Zoom. The online event was streamed in 3 languages: English, Chinese, and Japanese. This was an effort to accommodate the needs of prospective clients and tenants of Subang Smartpolitan who were joining from outside Indonesia. Thousands of attendees witnessed the event online from various countries.

President Director of PT Surya Semesta Internusa Tbk, Mr. Johannes Suriadjaja, opened the event with a speech in which he revealed that, “Subang Smartpolitan” as a city “Made From Future”. Built on a 2,700-hectare area, it is a dynamic metropolitan city with smart and sustainable concept.” He also shared his initial vision on how he wanted to make Indonesia, especially Subang, a better place for the future. He said, “It was all coming from a nearly 50-year old company vision of Surya Semesta Internusa ‘Building a Better Indonesia’, through our subsidiary Suryacipta Swadaya. We are building an independent and great city that will make our company vision come true. Subang Smartpolitan will not only contribute to Subang but also to Indonesia.”

By combining creativity and modern technology, the groundbreaking ceremony was designed to become not just an inauguration of groundbreaking, but also a visual display of the future city of Subang Smartpolitan. With the theme “Made From Future”, there was a video projection mapping to showcase Phase-1 development plan or South Plan area, consisting of South Smart Core, industrial plot, residential, utility area and commercial area.

Johannes Suriadjaja said, “The first phase of Subang Smartpolitan development covers an area of 400-hectares. This is a strategic project located in a promising business district in West Java, that is called Rebana Metropolitan.”

Rebana Metropolitan is a combined area of 6 regencies and 1 city that are predicted to become the future of West Java, namely the regency of Sumedang, Subang, Majalengka, Indramayu, Kuningan, Cirebon and Cirebon city.

“The growth of key strategic infrastructure such as toll access, airport and seaport will propel the economy in Rebana Metropolitan. That makes Subang Smartpolitan even more ideally placed because it is exactly in the heart of that business triangle. It will become the new investment destination in Indonesia,” added Johannes.

In the near future, Subang will develop rapidly, especially after the complete operation of Patimban Port, an international seaport similar to Tanjung Priok, Jakarta. The presence of Patimban will reduce logistics costs by bringing the production center closer to the port. This is expected to increase exports.

According to Johannes Suriadjaja, Subang Smartpolitan development is a form of commitment to participate in increasing the pace of the regional economy. The project is targeted to absorb local labor and contribute to the economy of the Subang Regency and West Java Province.

“Through its masterplan, Subang will become a pioneer in smart & sustainable city that carries an efficient infrastructure and technology as well as environmentally friendly in a very strategic location,” he said.

Johannes Suriadjaja also informed that a number of investors from various industries have expressed interest in developing businesses in Subang Smartpolitan. Our goal is to have companies from various sectors, such as automotive, consumer goods, pharmaceutical & medical equipment, high precision industries, IT, logistics, and so on.

“Currently, we cannot disclose the names of multinational companies in detail because we are bound by non-disclosure agreements,” he explained.

At the end of the event, a Memorandum of Understanding (MOU) was signed between PT Suryacipta Swadaya and prospective tenants in Subang Smartpolitan on stage. The signing of the MOU with the industry players in the automotive and logistics sectors is a form of positive interest in Subang Smartpolitan.